Tenochtitlan and the Aztec Pyramids

This morning we set out for the ancient city of Tenochlitan, the former capital of the ancient Aztec Empire. This trip involved an hour long bus journey which included a Mexican man playing his guitar( into my Mum’s ear) and singing on the bus. People also jump on and off the bus selling chocolate and drinks. When we arrived the sun was beating down and it was the hottest day yet even though thunder storms had been predicted. The sight of these enormous pyramids in the distance was amazing. There were three main ones to visit and each one was huge and very difficult to climb in the heat! We also visited the museum there which holds artifacts from the city and skeletons also. 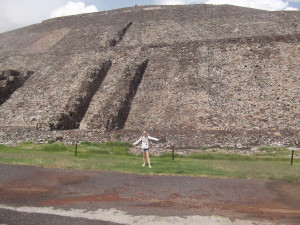 the side with no steps

Tenochlitan was the most amazing thing I have ever seen and I am thrilled to have been able to visit it.Mexico City is also full of history and monuments and tomorrow we are going to visit the National Museum of Anthropology which shows all the ancient civiilisations of ancient Mexico and then that will be enough culture for the day. I have to go shopping for some souvenirs and presents to bring home! 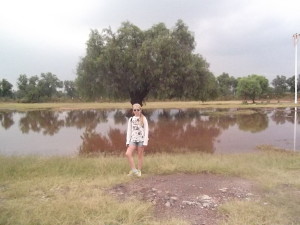 Adios,
Isobel
P.s. this will be last blog until I return to Ireland !