Well done but ultimately hard luck to our girls team which peformed so admirably in their Sciath na Scol final against Newcestown played in Clonakilty Sports Complex. We had high expectations coming into the final but from the off it soon became apparent that we would have a challenge on our hands. Our goalkeeper Chloe Stam is arguably the best goalkeeper in the Sciath na Scol league and she proved so once again yesterday with a number of point blank saves and blocks. She was well protected in front however with a full back line of Annie O’Callaghan and Ella Mai Griffin. Annie controlled that space in front of the goal with assured confidence and athleticism and stylishly brought the ball out from defence on numerous occasions. She was greatly helped by Ella Mai who ran herself to the ground, never once letting her direct opponent out of her sight. Vice-captain Caoimhe Griffin at centre back was one of the players of the match. Time and time again, the Newcestown attack perished on the rock that is Caoimhe. She won her battles in the air and on the ground. She intercepted passes all day and was responsible for setting up many of the Scoil Mhuire attacks. Sophie Logan at wing back was probably one of the players on the pitch who had most touches of the ball by the final whistle. Even when Sophie looked beaten, she never was. She battled heroically for every ball and was a vital cog in a hard working defence. Similarly on the other wing, such was the assuredness of her play, it was clear and obvious to see that Aisling Dineen too has plenty of football pedigree (her father and sister having represented Cork at various levels). Midfield was the engine room of our team. Sarah McSweeney (who this weekend will represent Cork at the primary game in Thurles) was majestic. Like a hot knife through butter, her direct running style split the Newcestown defence on several occasions. At times it seemed like Sarah was more so in a battle zone than on a football field such was the level of attention she received from the opposition. It didn’t deter her however and in true McSweeney style, everytime she got knocked down, she got up again. Her midfield partner Shauna O’Driscoll complemented Sarah and was instrumental in everything that was positive for us. Her relentless energy allied to her superb balance and skill posed many headaches for the opposition throughout.  Captain fantastic Samantha Ross at centre forward was the focus of our attack. A clinical finisher and one of our key players, she too was singled out for close attention. She was a major threat throughout however and still ended the game with a number of scores. At wing forward Brenna Guy played a very sensible game, creating space in the forwards and moving the ball through the lines creating a link between the defence and forward line. On the other wing Hannah Jardi was superb and her endless running and battling qualites were rewarded when she kicked a sensational point in the second half. The full forward line was ably led by Claire Roycroft. Claire won numerous amounts of possession and was an intergral link in our forward play throughout, laying off passes left and right to her on-rushing teammates. Beside her was Liadh O’Donovan from fourth class. Despite her tender age, Liadh played with great courage and conviction throughout and will undoubtely continue to be a star for Scoil Mhuire NS in the next number of years. Our substitutes made telling impacts also. Stella Schladt has only been in our school a short time and is originally from Germany which wouldn’t be considered a GAA stronghold. You wouldn’t have known this however given her display as she slotted in seemlessly, testament to her talent and application. Our other sub Emily Wood also made a telling contribution when introduced eventhough it was only for a brief period. Despite our valiant efforts right to the final whistle, Newcestown emerged victorious by a small margin. The girls can be very proud of their immense efforts and perhaps one of the most pleasing aspects of the day was the manner of their spirit, determination and never-say-die attitude even when the game looked to be slipping away from them. These are positive attributes that will stand to them in the future, not just on the sporting field but in life in general. Other vital players who played important roles in previous games against Castletownbere and Enniskeane and thus helping us reach the final were Shauna Stam, Aine Meadbh O’Regan, Sydni Campbell, Kiva Scannell, Ayla Solari and Saira Collard O’Driscoll . All these players are eligible for next year again so we look forward to seeing them get more game time! Well done one and all! 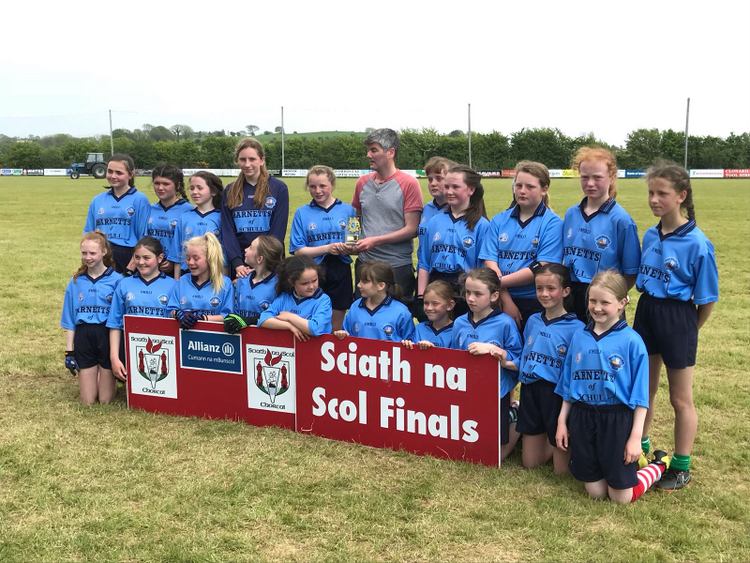